Workflow engine is a Finite State Machine with memory. It is used to execute set of methods in a specified order.

Here is a simple example of a workflow configuration:

In the above simple configuration example, you can probably guess what the processing pipeline does with tokens - the whole task is made of four steps and the whole configuration is just stored as a Python list. Every task is implemented as a function that takes two objects:

There are NO explicit states, conditions, transitions - the job of the engine is simply to run the tasks one after another. It is the responsibility of the task to tell the engine what is going to happen next; whether to continue, stop, jump back, jump forward and few other options.

This is actually a feature, useful when there are a lot of possible exceptions and transition states to implement for NLP processing, as well as useful to make the workflow engine simple and fast – but it also has disadvantages, as the workflow engine will not warn in case of errors.

The workflow module comes with many patterns that can be directly used in the definition of the pipeline, such as IF, IF_NOT, PARALLEL_SPLIT and others.

The individual tasks then can influence the whole pipeline, available ‘’commands’’ are:

Consider this example of a task:

Tasks are simple python functions, we can enforce rules (not done yet!) in a pythonic way using pydoc conventions, consider this:

So using the python docs, we can instruct workflow engine what types of arguments are acceptable, what is the expected outcome and what happens after the task finished. And let’s say, there will be a testing framework which will run the workflow pipeline with fake arguments and will test all sorts of conditions. So, the configuration is not cluttered with states and transitions that are possible, developers can focus on implementation of the individual tasks, and site admins should have a good understanding what the task is supposed to do – the description of the task will be displayed through the web GUI.

Here are some examples of workflow patterns (images are from http://www.yawlfoundation.org) and their implementation in Python. This gives an idea that workflow engine remains very simple and by supplying special functions, we can implement different patterns. 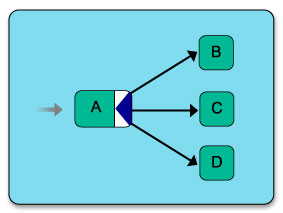 This pattern is called Parallel split (as tasks B,C,D are all started in parallel after task A). It could be implemented like this: 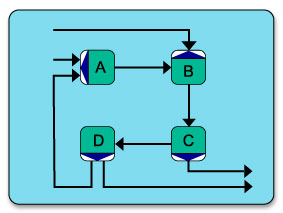 This is just for amusement (and to see how complicated it looks in the configuration).

Jumping back and forward is obviously dangerous and tedious (depending on the actual configuration), we need a better solution. 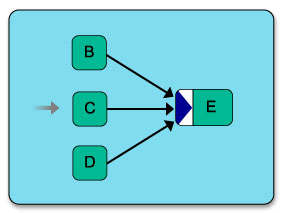 After the execution of task B, task C, and task D, task E can be executed (I will present the threaded version, as the sequential version would be dead simple).

Configuration (i.e. what would admins write):

This documentation is automatically generated from Workflow’s source code.

Workflow engine is a Finite State Machine with memory.

Workflow engine is a Finite State Machine with memory.

It is used to execute set of methods in a specified order.

This workflow is then used as:

This workflow engine instance can be freezed and restarted, it remembers its internal state and will pick up processing after the last finished task.

However, when restarting the workflow, you must initialize the workflow tasks manually using their original definition

It is also not possible to serialize WFE when custom factory tasks were provided. If you attempt to serialize such a WFE instance, it will raise exception. If you want to serialize WFE including its factory hooks and workflow callbacks, use the PhoenixWorkflowEngine class instead.

Insert one callable to the stack of the callables.

Insert many callable to the stack of thec callables.

Save a pointer to the processed objects.

Stop in the current loop but continues in those above.

There are possibly many workflows inside this workflow engine and they are meant for different types of objects, this method should choose and return the callbacks appropriate for the currently processed object.

Method to set attributes of the workflow engine.

Use with extreme care (well, you can set up the attrs directly, I am not protecting them, but that is not nice). Used mainly if you want to change the engine’s callbacks - if processing factory before_processing, after_processing.

Continue with the next token.

Delete parameter from the internal storage.

Execute the callback - override this method to implement logging.

Return callbacks for the given workflow.

The return value of this method is not thread-safe.

Return iterator for walking through the objects.

Return named obj from internal stack. If not found, return None.

Return True if parameter of this name is stored.

Return x calls back in the current loop.

Be careful with circular loop.

Jump to x th call in this loop.

Return x tokens back - be careful with circular loops.

As the WFE proceeds, it increments the internal counter, the first position is the number of the element. This pointer increases before the object is taken.

Remove all the tasks from the workflow engine instance.

Remove callbacks for the given key.

Restart the workflow engine after it was deserialized.

Execute callbacks in the workflow.

The logger instance must be pickable if the serialization should work.

Store the obj in the internal stack.

Set the (default) workflow which will be run on process() call.

Break out, stop everything (in the current wfe).

Engine is able to be serialized and re-executed also with its workflow tasks - without knowing their original definition. This implementation depends on the picloud module - http://www.picloud.com/. The module must be installed in the standard location.

Bug reports, feature requests, and other contributions are welcome. If you find a demonstrable problem that is caused by the code of this library, please:

If you create a feature branch, you can run the tests to ensure everything is operating correctly:

Workflow is free software; you can redistribute it and/or modify it under the terms of the Revised BSD License quoted below.

Redistribution and use in source and binary forms, with or without modification, are permitted provided that the following conditions are met:

THIS SOFTWARE IS PROVIDED BY THE COPYRIGHT HOLDERS AND CONTRIBUTORS “AS IS” AND ANY EXPRESS OR IMPLIED WARRANTIES, INCLUDING, BUT NOT LIMITED TO, THE IMPLIED WARRANTIES OF MERCHANTABILITY AND FITNESS FOR A PARTICULAR PURPOSE ARE DISCLAIMED. IN NO EVENT SHALL THE COPYRIGHT HOLDERS OR CONTRIBUTORS BE LIABLE FOR ANY DIRECT, INDIRECT, INCIDENTAL, SPECIAL, EXEMPLARY, OR CONSEQUENTIAL DAMAGES (INCLUDING, BUT NOT LIMITED TO, PROCUREMENT OF SUBSTITUTE GOODS OR SERVICES; LOSS OF USE, DATA, OR PROFITS; OR BUSINESS INTERRUPTION) HOWEVER CAUSED AND ON ANY THEORY OF LIABILITY, WHETHER IN CONTRACT, STRICT LIABILITY, OR TORT (INCLUDING NEGLIGENCE OR OTHERWISE) ARISING IN ANY WAY OUT OF THE USE OF THIS SOFTWARE, EVEN IF ADVISED OF THE POSSIBILITY OF SUCH DAMAGE.

In applying this license, CERN does not waive the privileges and immunities granted to it by virtue of its status as an Intergovernmental Organization or submit itself to any jurisdiction.

Workflow was originally developed by Roman Chyla. It is now being developed and maintained by the Invenio collaboration. You can contact us at info@invenio-software.org.